BITBANG International Animation, Videogames and Digital Art Festival opens its call and invites you to be part of its eighth edition to be held from October 24th to November 6th, 2022, in a hybrid format, in Buenos Aires, Argentina.

Once again, BITBANG welcomes the video games from all over the world.

BITBANG disseminates and promotes innovative, experimental and authorial proposals through projections, exhibitions and competitions. We promote audiovisual creation in Argentina, orientated towards the development and consolidation of the industry as a cultural contribution on a worldwide level.

Since 2015 we have organized BITBANG, a unique experience that each edition allows all those interested in art, creativity and innovation, to meet with the most important referents in the country and the world. It is a meeting point between animation, video games and digital art that enables collaboration between artists from different disciplines and generates the construction of new languages and other perspectives.

1.1 Individuals over 18 years or legal entities of any nationality may participate individually or collectively, through the submission of video games that meet the requirements established in the following rules.

1.2 The call is open for independent video games made in any country and in any format (PC, consoles, mobile, web, laptops) that HAVE BEEN PUBLISHED between January 1, 2020 and the application deadline, June 30th, 2022.

1.3 Additionally, final stage projects that have not yet been published will be accepted.

1.4 A video game will be considered Latin American when the majority of its producers reside in any of the Latin American countries and one of the languages of the game is Spanish or Portuguese.

1.5 A video game will be considered international when the majority of its producers reside outside the territory of Latin America.

1.6 A video game developed in the spirit of an “indie game” and published on its own will be considered independent.

1.7 The Festival’s Curatorial Committee reserves the right to reject the work at its sole discretion.

1.8 Participating video games must be based on an original idea and cannot be a modification of a pre-existing game.

1.9 Participation is free of charge.

3.1 Best Design and Gameplay: Those games that stand out for the originality of the concept, its mechanics, level design and difficulty balance will be nominated.

3.2 Best Visual Arts: Those games that stand out for the quality of their graphics, art direction, animation and visual effects will be nominated.

3.3 Best Soundtrack: Those games that stand out for the quality of their music, sound effects and voices will be nominated.

3.4 Best Narrative: Those games that stand out for the quality of their narrative universe, story, script and dialogue will be nominated.

3.5 BIT BANG Award for Best Latin American Video Game: The video game with the highest number of nominations and votes from the jury in all categories will be the winner.

3.6 BIT BANG Award for Best International Video Game: The video game with the highest number of nominations and votes from the jury in all categories will be the winner.

4. REGISTRATION, SUBMISSION AND SELECTION OF ARTWORK

4.1 The participating works must be registered and send the press materials (images, logos, screenshots, trailers) and the necessary instructions for the jury to install the competing video game, including download codes or installation links (Steam, Android , iOS, web, etc.). The jury will be assigned based on the devices necessary to install and test the submitted video games.

4.3 The registration of a game in this call supposes the total acceptance of these terms. By submitting a game to compete in any of the categories, the applicant declares to be the owner of all copyright on the game and/or to have the power to authorize public communication of the game between the moment of acceptance and the end of this festival edition.

4.3 In the event that the project compromises, affects or includes the total or partial use of works protected by national or international legislation on Intellectual Property, and whose copyright holders are persons other than the Applicant of the project, the signatory of the application further declares to have the express authorization of said work, given by the owner of the copyright, complying with the formalities indicated in these terms. Authorization is understood as permission granted by the copyright holder, in any contractual form, to use the work in some of the ways and by some of the means that the legislation on intellectual property establishes. The applicant is responsible for any infringement of said rights and is obliged to defend and leave the Festival organization harmless in any claim submitted by third parties for this purpose.

4.4 The Festival organization reserves the right to make the decisions it deems pertinent regarding situations not expressly provided in these terms.

5.1 The jury will be made up of professionals in the field of video games, such as game designers, producers, game journalists and other professionals familiar with video game development.

5.2 Persons directly related to the game in competition and to the organization of the Festival will be disqualified from being part of the jury.

5.3 There will be only one winner per category.

5.4 The Festival jury may declare one or more award categories void.

6.1 The Official Selection will be published on the website bitbangfest.com and the creators of the selected games will be notified by email.

6.4 The delivery of the competing game (code or installation link) must be made within the stipulated deadlines. Otherwise, it will be disqualified.

6.5 The selected games must be personally exhibited by their developers during the Festival. In case of not attending in person, they may appoint a representative or authorize the organization of the Festival to exhibit the work.

6.6 The Festival will not cover transportation, accommodation, food, health or other costs to developers whose works are selected to attend the event. However, the Festival may provide letters of support to manage the necessary resources before the institutions that favor the attendance of those selected.

7.1 BITBANG performs free activities of exhibition of animation, video games and digital art during the year. The participants who register their artwork also accept, unless expressly agreed to the contrary, its presentation in traveling exhibitions of the Festival, Film Cycles, etc. These activities will always be free and have as its only purpose the dissemination and promotion of animated films, video games and digital art.

Participation in the Festival implies full acceptance of this regulation. The Festival will resolve according to its judgmentprem and in an unappealable character any eventuality not specified in these terms. 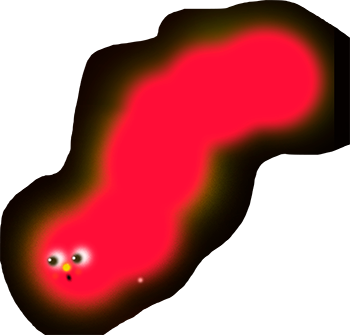